We thought we’d check out the hot new restaurant Red O on Melrose in the beautiful new basket-like building that used to house old Moustache Cafe space.  Of course there’s no way to get a rezzie at this point, but the reservationist told us to show up and avail ourselves of the copious space at the two bars.  Well, apparently she must have told everyone in LA county and perhaps half of Orange county the same thing because by the time we got there, “They were at capacity.”  Or so stated the icy and officious door man.  We were curtly told we could wait and since we were the first in an increasingly long line of people waiting, we decided to wait.  And wait we did.  45 minutes.  Even when we pointed out to the doorman that many people had left and we could see that the side bar was almost empty, he kept to his line, “We’re at capacity.”  Oh well.  Many had it worse than us.  Others who had been sent away to put on more suitable attire were sent to the back of the line when they returned.  And many people with reservations were turned away when they arrived in shorts (as it should be).  Tempers flared around us but we kept our cool and continued to wait.  Eventually the doorman warmed up and was actually a nice guy.  Finally we were rewarded with two seats at the front bar.  Curiously, we noticed that the communal table and back bar were about 25% occupied.  Oh Well.  The interior was bright, breezy, tropical meets north African with many small niches and corners to sit.  Unfortunately, our seats at the bar were next to two black leather swings which were irresistable to the many women who obviously went to the Linsay Lohan School of Charm  and kept swinging into us.  The barman was friendly and helpful and gave us prompt service despite the demanding club-scene ambiance.  The wine list was quite good and we settled on a Falanghina.  However, when we asked the barman what was vegetarian on the menu, his face fell.  Turns out, not much.  A sum total of seven items, mostly nibbles and snacks.  Even many of the things that appeared to be vegetarian contain lard.  Now, we’re not naive about Mexican food, but this is LA.  Hot chef Rick Bayless, fresh from his recent White House state dinner, clearly has put together a complex menu.  Everyone around us were raving about the dishes so we decided to go ahead.  We started with the guac and chips, about as standard as you’d get anywhere.  We moved on to the Red O salad, a mixture of lettuces with garlic-lime dressing, wire-thin crisps of tortilla, and pickled onion.  Again, very good, but nothing over the top.  Next came the queso fundidos, with its pile of mushrooms on top, served with warm corn tortillas.  Warm, cheesy, comforting, we liked it best when combined with the mushroom soft tacos, which were mixed with beans.  Everything was very good, but clearly vegetarians are an afterthought here.  The scene was great, the crowd beautiful, the service good, the food ok.  Would we kill ourselves coming back?  Probably not.  Oh well. 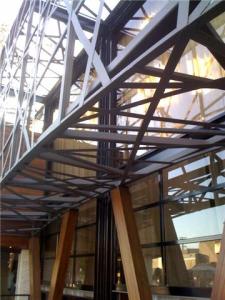 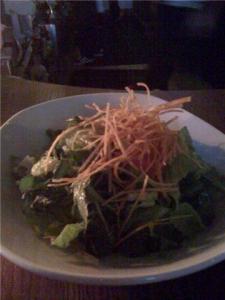 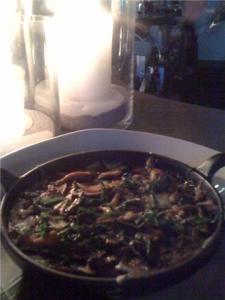 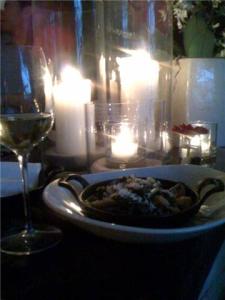