It appears that a new restaurant is replacing the estwhile Superba in The Point, on the corner of Rosecrans and Sepulveda in El Segundo.  Paper is covering the windows announcing that this will soon be a branch of Little Sister.  With two locations and two more on the way (the other coming location will be in the Irvine Spectrum), Little Sister offers a unique take on cuisine resulting from “rich collisions of food and culture that was borne out of the European colonization of Southeast Asia”. Check out their menu here.

There are a great many of you who read this blog that appear to be very excited about the arrival of the big shopping/dining development The Point, situated on the corner of Rosecrans and Sepulveda in El Segundo (Manhattan Beach adjacent).  Much of your attention is focused on the True Food Kitchen (that according to their website is now open), but as I’ve told you before, there are many other eateries on the way as well.  I can’t exactly say when all of those restaurants will open (although it looks like most will be open very soon), I can tell you that The Point officially opens this Thursday with a 9:30am complimentary continental breakfast followed by a ribbon cutting ceremony and other activities over the weekend that you can read more about here. 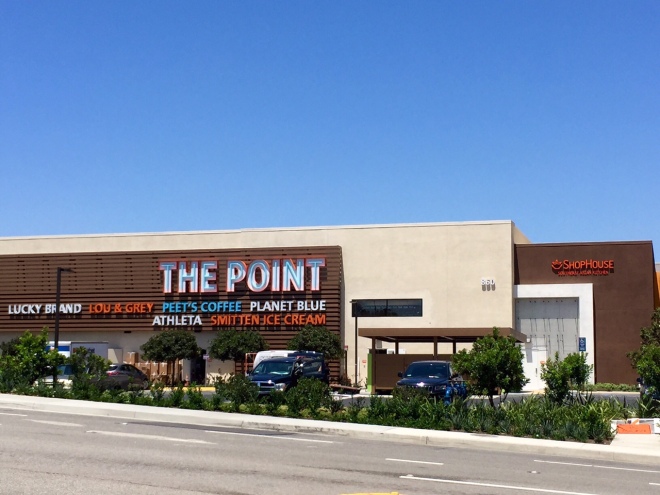 I’ve been watching The Point, the upscale outdoor mall being built on the corner of Sepulveda and Rosecrans in Manhattan Beach/El Segundo.  After a little bit of investigation back in September, I told you that True Food Kitchen would be moving into the colossal development in 2015.  And now comes news, via the LA Times, of the other restaurants that will be on offer:  Mendocino Farms, Superba Food & Bread, Shophouse, North Italia (which along with True Food Kitchen is part of the Fox Restaurant Concepts group), and a “restaurant and marketplace” from the founder of Pitfire Artisan Pizza.  Look for the openings to begin sometime in 2015.